Decided on a location...

It is set! We are getting married at the Rose Chapel in Fort Worth on July XX, 2011! Credit here for the pictures below. 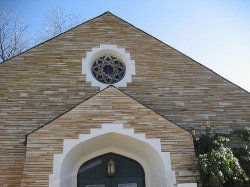 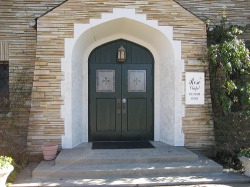 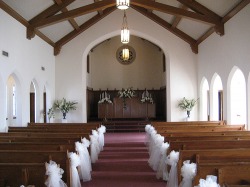 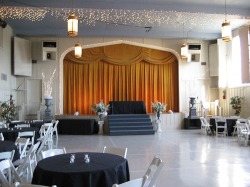 So, we really struggled between choosing a venue. We knew it was between The Country Abbey, Rose Chapel, and Lofty Spaces. After looking at Lofty Spaces, we realized how important a large reception area would be. So, that eliminated The Country Abbey (even though they were so so so nice there and the area was so so so cute and the dressing rooms were so so so so nice). Then the tough part was deciding between Rose Chapel and Lofty Spaces. I'm not going to lie, I definitely wanted to do Lofty Spaces. But, this was taking a huge chance. What if it's too hot (as a past bride found), what if we don't have privacy in the bridal loft (because we would have to share with caterers), what if people had problems finding it, what if it didn't live up to the expectations of my friends and family (since I would be designing every aspect of decor). The "what ifs" really added up. At first, I was so excited for the challenge. I thought a paper lantern, vintage, shabby chic wedding was SO ME. But after I heard that people had problems with being hot in the past, that was the deal breaker. I definitely do not want my guests or my husband-to-be to be hot and uncomfortable.
So, we decided on Rose Chapel! The people there that I have been in contact with are so very nice. They even held my date for me before we were able to have an actual appointment to pay the deposit and sign the contract. I think the Rose Chapel is beautiful. It is a quaint and cute chapel and the ballroom is very cool. I can't wait to really delve into my planning now!
3 Comments
Fotograf Warszawa link
7/26/2012 07:25:57 pm

I dont feel Ive read anything like this before. So good to locate somebody with some original thoughts on this subject. thank for starting this up. This web site is something that is necessary on the web, someone with a bit originality. Excellent job for bringing something new towards the internet!

Together with almost everything that seems to be building inside this specific area, a significant percentage of opinions are in fact rather exciting. Even so, I'm sorry, but I do not give credence to your complete strategy, all be it exciting none the less. It would seem to everybody that your comments are in fact not completely justified and in simple fact you might be your self not even entirely convinced of your point. In any event I did appreciate reading by way of it.

Not often do I encounter a weblog that is both educated and entertaining, and let me tell you, you may have hit the nail on the head. Your concept is outstanding; the concern is something that not sufficient individuals are speaking intelligently about. I am extremely pleased that I stumbled across this in my quest for something relating to this.